Dozens of firefighters gathered outside Sheffield Town Hall to lobby councillors to seek a reversal of planned cuts by South Yorkshire Fire and Rescue. The fire service faces cost pressures from a national shortfall in pension contributions and is proposing to reduce the number of firefighters on each fire engine from five to four. Baillor Jalloh reports for Sheffield Live!

Passengers’ anger at bus service reductions in Walkley and Hillsborough has led to calls for bus services to be returned to the control of local authorities. Hillsborough councillor George Lindars-Hammond told Sheffield Live! that rising fares and cuts in services were unacceptable and that the private companies responsible should be brought into public ownership. Azz Mohammed reports.

A Broomhall youth worker has blamed cuts to youth and social funding as a reason for the rise in youth crime. Sheffield Live! reporter Baillor Jalloh spoke to Saeed Brasab, project coordinator at Unity Gym.

A campaign has been launched by residents in the north of Sheffield to improve transport connections to Meadowhall shopping centre following recent cuts to bus routes. A petition has been started via the Sheffield Council website and is gathering support including the backing of Steve Wilson, councillor for East Ecclesfield ward. Azz Mohammed reports for Sheffield Live!

Demonstrators protested outside the Eastern Avenue job centre in Arbourthorne, earmarked for closure as part of government cuts to public services. The Public and Commercial Services Union is opposing the cuts and was joined at the protest by Clive Betts, MP for Sheffield South East. Sheffield Live! reporter Azz Mohammed spoke to Martin Jones of the PCSU and centre user Jennifer Jones.

Senior health bosses have laid bare the scale of the challenge facing Sheffield’s NHS services following the publication of a major report which called for ‘radical change’. South Yorkshire and Bassetlaw are tasked with saving hundreds of millions of pounds by 2020 to address an estimated shortfall of £571 million. Sheffield Live! reporter Simon Thake spoke to Dr Jillian Creasy of the Save Our NHS campaign. 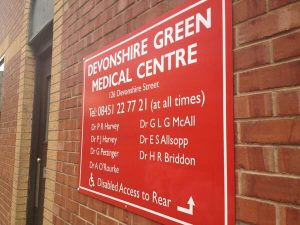 GP surgery’s in Sheffield have said that they may have to close if funding cuts continue to be phased in over the next few years.

Cuts to the Minimum Income Practice Guarantee (MPIG) pose a real threat to the survival of up to five surgery’s in Sheffield.

Sheffield could see up to 13,000 patients being directly affected because of the withdrawal of MPIG funding.

The additional funding supports GP surgeries which serve populations with more complex and demanding health needs. The Government began withdrawing MPIG funding in April 2014 and plans to phase it out totally over the next seven years.

NHS England says 100 GP surgeries across the country are threatened by closure as a result, whilst the British Medical Association has warned that the number of surgeries seriously affected will be far higher.

Some practices under threat could lose more than £100 per patient per year, while others will lose £20 or £30 per patient.

Devonshire Green Medical Centre and the Hanover Medical Centre are two of the affected surgery’s in Sheffield. MPIG funding cuts could be in the region of £140,000 between them.

Staff are concerned that they may have to close. Dr Graham Pettinger, who works at both practices said: “At the moment, NHS England have a poor understanding in my view on the impact this is going to have on practices and the patients in Sheffield and across the country on a whole.” Dr. Pettinger continues “This is an extremely serious threat to our survival – if we are unable to find replacement money then the practice may have to close its door to the patients and the community.”

Paul Blomfield, MP for Sheffield Central, challenged Health Minister’s on this issue. He said: “Local GPs have expressed serious concerns to me about the consequences of this vital funding being withdrawn. The Health Minister’s answer to my question was shockingly complacent. He’s putting patients at risk and I’ll now be seeking a meeting with Ministers to press this issue further.”

Mr Blomfield added “Our local GP surgeries are the first port of call for most people who are unwell or have health difficulties. No-one wants to see service cutbacks having to be made which is why I’m raising this issue now before the situation gets critical. The Government should be talking to GP surgeries now and rethinking this decision.”

A spokesperson for the South Yorkshire and Bassetlaw area team of NHS England, said: “We are committed to making sure patients have access to high quality GP services. The minimum practice income guarantee (MPIG) payment is being phased out to make funding for GP services more fair for everyone.” They continued “This is a national plan. Future funding for GP services will be based on the numbers of patients that a GP practice serves and the health needs of those patients. These changes started in April this year and will happen over a seven year period.”