Around four hundred people took part in a march and rally to remember what has widely become known as the Battle of Orgreave. The Orgreave Truth and Justice campaign have produced a report and are calling for a public inquiry in to what happened on 18 June 1984.

A campaign to highlight what puts people at risk of developing Diabetes has been launched this week. The Sheffield branch of Diabetes UK have set up an information point in the centre of town as part of the national campaign.

Hallam University Paramedic students have developed training to attract more people from Black and Minority Ethnic backgrounds into the profession. Research shows that only 7 percent of the service are from Minority communities.

Anyone found producing or supplying psychoactive substances, otherwise known as legal highs, now face up to seven years in prison under new legislation introduced this week.

Women on the internet are often on the receiving end of abuse on social media a recent study has shown. A cross party campaign has started to tackle the growing issues of online abuse.

Gill Furniss, widow of former MP Harry Harpham, has won the Sheffield Brightside and Hillsborough by-election, with a 6% increase in Labour’s share of the vote.

Following an acceptance speech in which she promised to carry on Harry Harpham’s work, she told Sheffield Live!: “The steel issue is a big issue in the city. We have already been hurt in the past. But I think there’s a window of opportunity to keep steel in this city for the long term”.

Tom Watson, Deputy Leader of the Labour Party, speaking at the Sheffield Brightside and Hillsborough by-election count, said: “In Sheffield the debate about the future of British steel has seized all of our attention. Jeremy took a leadership position on that. Hopefully it will mean we can secure the future of that industry. It’s early days in Jeremy’s leadership but I hope we are showing there’s a different way to do politics.”

The more of these pop-punk gigs I attend at Corporation, the more madly I fall in the love with the genre and all of the wonderful things it has to offer.

Having only listened to Patent Pending in passing previously, I entered the room without any expectations. I sometimes find this is the best method when I’ll be writing a review because it means I don’t wander in already thinking “I am bound to enjoy this.”

Each track encouraged movement and a great sense of ‘togetherness’ flooded the room.  The group even covered the theme tune from The Big Bang Theory (originally by the Barenaked Ladies) which went down an absolute treat.

The showmanship was unsurpassable, with heaps of audience interaction (including a crowd swimming competition with Joe Ragosta and his younger brother!)  and jokes rolling one after the other, it was such an enthralling atmosphere and there was not a single second I did not feel captivated and excited.

There are very few things that are comparable to the sense of community and belonging at a pop-punk concert with a band like Patent Pending. They speak from the heart and deliver messages that are meaningful and have purpose, that does not mean to say that they are serious – these guys are anything but – however, they are genuine guys who never stray from this which can be so easy to do once you find yourself in the limelight.

Please please follow the guys on Twitter @PTPGOfficial and as always a huge thanks and shout out to my favourite alternative venue in Sheffield Corporation. 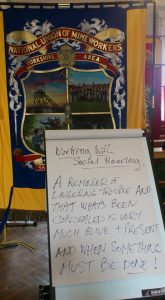 Can our communities’ pasts haunt us? Are there traces of ideas and ways of living from that past that are not simply done and gone, but could be brought to life again? And how does the past impress itself on us in the present?

Social Haunting: talking to the ghosts of our past is a new radio documentary about an ambitious research project that uses arts practice to explore the idea of “social haunting.” You can hear it at 9am on Wednesday 10th February, here on Sheffield Live.

A “social haunting” is said to occur in circumstances where there’s been repression or trouble in society and as a result, the past presses in to the present in ways that aren’t obviously visible.

“Ghosts” appear when the pressing concerns of the past have not been attended to.

The Working with Social Haunting project explored the usefulness of this concept with two groups of people, those involved in the cooperative movement in Lancashire, and in trade unionism in the former coalfields of South Yorkshire.

The 30 minute radio documentary Social Haunting: Talking To The Ghosts Of Our Past will be broadcast on Sheffield Live radio (93.2FM and online) on Wednesday, 10th February at 9am.

Tune in to the show – and engage with the programme’s producer, Max Munday on twitter: #socialhauntinglive and @mouthpiece4shef and on Facebook (On social media, please do not refer by name to any of the participants who you may know; comments will be moderated).

You can also email comments to Max Munday via mouthpiece@sheffieldlive.org. Your feedback is encouraged and welcomed.

When Inherit the Stars announced they’d be playing one of Sheffield’s most talked-about venues – The Rocking Chair – for their first gig of 2016 the news created quite the buzz. People were excited, and I’m including myself! Although after an amazing show last year I was sceptical whether it could be topped – or even matched.

The Rocking Chair was absolutely rammed and the atmosphere electric, the clear support and admiration from the fans just shows that this is a solid group with genuine talent that is being recognised more and more every day. Growing in popularity and even more so in skill, it seems there is no end to what Inherit The Stars can pull out of the bag.

Daniel Jeffrey brought the crowd together by bringing a delightful duo of charm and charisma to the table, with the occasional quip from Lewis Wild (bassist) bringing us crashing back to earth with his dry banter which never fails to leave everybody smiling.

For me, I am very much a lyrics lady and having the opportunity to join in really does it for me so songs like Exit Plan, If We Fall, We Fall Together and oh, one more, Better Than This are absolutely on point.

Just the sheer quality of the production of the music is noteworthy, these guys don’t sound as though they belong in local venues but headlining stages at festivals everywhere. I find it difficult to fault Inherit The Stars because they just “sound” good, as if there is something for everybody in there, a tasty medley of metal, rock, pop with a cheeky serving of electro/synth sauce on top.

There is no doubt in my mind that the four lads are going to go further than they ever expected.

I strongly recommend giving them a try: