Award-winning film, Un Condor, tells the story of Sergio Contreras, the larger-than-life waiter who became the popular front man of Sheffield’s El Paso restaurant. Fewer people know the circumstances that forced Chilean-born Contreras to seek sanctuary in Sheffield after Pinochet’s overthrow of the Allende government in 1983. Film director Yannis Kolozis was inspired to turn his story into a feature length movie, awarded Best Documentary at the 2015 Athens International Digital Film Festival together with a clutch of other awards. Now the film, Un Condor, is to get its big screen debut in Sheffield. The film focuses on Sergio’s emotional return to Chile nearly forty years after he was forced to leave or face imprisonment. Contreras was only seventeen when he said goodbye to his family and all he had known to travel thousands of miles to a life in exile. Un Condor is showing at the Showroom cinema on Sunday. Simon Thake reports for Sheffield Live!

Television programmes in production for Sheffield Live! TV were enthusiastically applauded by a public audience including shareholders and supporters at a Showroom Cinema screening last week.

The first Sheffield Live! TV showreel has now been published online to view and comment. Sheffield Live! TV, the digital local TV channel for Sheffield, will launch in autumn on Freeview, Virgin cable and the internet. The showreel provides a taster of the range of content planned for the new channel including music, film, outdoors, sport, comedy and experimental work.

Sheffield Live! TV is locally owned and run for community benefit. Sheffielders have been invited to invest in the project to help get it off to a flying start and to join a growing band of community shareholders. The Sheffield Community Media Ltd Pioneer and Community Share Offer is open until 14 August, with full details available online at: www.sheffieldlive.org/shares

Join us for a breakfast screening with an eclectic selection of showreels from our independent producers. Sheffield Live! TV will carry a diverse mix of news and current affairs, music, culture, sport, community and alternative programming, featuring Sheffield talent and creativity.

Join us for breakfast, with refreshments, light snacks, a chance to talk to some of our programme makers and a screening at the Showroom Cinema on 24 July 2014 – a taste of things to come. 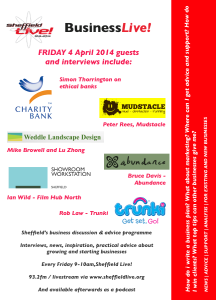 You can listen to / download the podcast of the whole show here (available for approx 60 days from 5 April). Or listen to some of the interviews:

The BusinessLive! show broadcasts every Friday from 9am to 10am on Sheffield Live!

Tickets for the Sheffield Adventure Film Festival go on sale from this week from the Showroom Cinema – and the 9th ShAFF is set to be the biggest yet.

More than 100 films will be screened at this year’s ShAFF, taking place from 4 – 6 April 2014, thanks to additional venue space at Sheffield Hallam University’s Pennine Lecture Theatre and more screenings at Red Bull’s outdoor Cityscape Cinema at the amphitheatre.

Sheffield Adventure Film Festival launched the ShAFF 2014 trailer on BMC TV this week ahead of its cinematic screening at the Best of ShAFF 2013 at the Showroom Cinema on Thursday 13 February and YouTube release on Tuesday 18th February.

There were over 200,000 views of the 2012 and 2013 ShAFF trailers; this year’s was been produced by Peak District adventure and outdoor photographer and filmmaker Lukasz Warzecha and his Polished Project colleague Wojtek Kozakiewicz.  The soundtrack is ‘Life in Glorious Stereo’ by Sheffield band Screaming Maldini.

You can watch the trailer here:

It also includes more cycling films as part of ShAFF’s ‘Tour de Cinema’ partnership with DocFest as part of the Yorkshire Festival in the run up to the Tour De France.

A suggested donation of £1 from every ticket sold will go towards supporting Sheffield Hospitals Charity raising the £5,000 that is needed to provide a satellite blood fridge in the resuscitation room of the Emergency Department at the Northern General Hospital’s Major Trauma Centre.

Festival Director Matt Heason said:  “Lukasz and Wojtek have done a cracking job taking over the reins of producing the ShAFF trailer from Alastair Lee and it’s fitting that it opens with Leo Houlding in Al’s new film ‘The Last Great Climb’.

“We’re particularly proud to be supporting Sheffield Hospitals Charity, especially as ‘Risk and Reward’ is a theme that reoccurs in so many of this year’s films.  We’re also grateful to Screaming Maldini for letting us use another of their tracks.  Their energetic, soaring orchestral sound is a perfect backdrop for the incredible footage that we’re privileged to screen.”

Nick Cox from Screaming Maldini said:  “We’re delighted and honoured to be involved with this amazing film festival for the second year running.  Seeing our music set to such incredible feats of human endurance, strength and death-defying bravery makes us feel immensely proud while at the same time immensely physically inadequate!”

Sheffield Hospitals Charity Director, David Reynolds said: “ShAFF is a hugely successful event so I’m delighted that the festival is supporting Sheffield Hospitals Charity this year and the delivery of emergency care. I’d like to urge everyone attending the event to please support our fundraising efforts to supply a satellite blood fridge.  Having immediate access to this facility is vitally important for severely injured patients, who are losing blood. No time will be lost collecting blood from elsewhere within the hospital which means you can be sure that every penny donated will have a direct impact on the care of patients at a time when they need it the most.”

Built as a stylish art deco car showroom in the 1930s, the Workstation opened in 1993 as Sheffield’s first managed workspace and centre for creative industries.

Over the years, many of the greats in Sheffield’s creative community have been associated with the Workstation, from Designers Republic to Warp Films to Sheffield Doc/Fest to Last Laugh Comedy Club.

And the Workstation has been the backdrop for some legendary local moments – Warp Films used the roof of the building to film scenes in Four Lions, The Human League used to rehearse in the basement, the Arctic Monkeys made a music video here, the auditions for Prisoners’ Wives took place on the third floor and Richard Hawley’s old band The Longpigs used to call office 103 home.

The Workstation is planning a series of events to mark the anniversary, beginning with the We Are 20 Exhibition, which runs throughout the summer until the end of September. It is free for anyone to pop in and take a look, open 8.45am-7.45pm Monday to Friday.

This exhibition charts the development of the former Kennings car showroom on Paternoster Row from post-industrial husk, ear-marked for demolition in favour of a car park, into the thriving cultural and creative hub it is now. The exhibition features a specially commissioned piece by ‘We Live Here’ artist Jonathan Wilkinson, alongside photography by Graham Gaunt, Mark Harvey, Shaun Bloodworth, Hugo Glendinning and Matthew Conduit.

On Thursday 12 September there will be a special ’20 by 20×20’ Pecha Kucha event dedicated to celebrating the legacy of the Workstation in which notable tenants, past and present, will give snappy insightful presentations about their work using the Pecha Kucha format of 20 slides with 20 seconds per slide. Pecha Kucha events are fun, sociable networking events with a strictly no business cards policy and this event will be a showcase for some of the city’s most successful creative and digital entrepreneurs – a must for anyone wishing to follow in their footsteps and get inspired. The lineup of speakers will be announced shortly – tickets are on sale now at: http://pknsheff14.eventbrite.com/

At the end of September, the Workstation will host a great big anniversary party – a chance to reunite and reminisce for tenants and a thank you to all the Workstation’s friends, associates and supporters.

In addition to these events, the Workstation is working in partnership with Dr. Marta Herrero of the University of Sheffield who is conducting a research project to assess the economic and cultural impact of the Workstation as a means of launching a broader discussion about the value of culture. Further events linked to the research project will be announced soon. 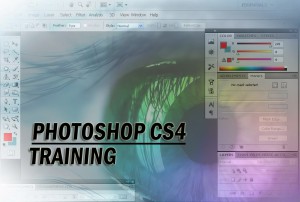 Adobe Photoshop is the industry’s leading digital image editing software. It is the perfect creative tool for designing and manipulating images for print layouts, web publishing, multimedia, video, photography and visually expressing your creative ideas. The ‘Showroom’ in partnership with Sheffield Live! is offering two weekend courses in May to improve your skills in this amazing software package. These sessions will take place in the new Sheffield Live! computer suite and participants will gain expert tuition in the core elements of Adobe Photoshop CS4

The course will be filled with a number of hands-on tutorials which you’ll work through with help from your tutor. Some of the features you’ll learn are:

• Navigating your way through the Photoshop CS4 workspace.
• How to use ‘auto correction’ tools to fix common problems with tones, contrasts and colours.
• How to crop and resize images.
• How to use healing brushes to fix blemishes within a photograph
• Understand the basic use of layers.
• Adding text to photographs.
• How to easily apply filters to create stunning special effects.
• How to save and print your images.

The course will be filled with a number of hands-on tutorials which you’ll work through with help from your tutor. Some of the features you’ll learn are:

Places can be booked through the showroom box office on 0114 2757727
or online www.showroomworkstation.org.uk