A crowdfunding campaign launched in the name of the threatened Vernon Oak is set to distribute the children’s book The Lost Words to Sheffield schools and libraries. The book of spells and spelling looks at words from nature that are falling out of use and seeks to give them new life through writing and illustrations. Baillor Jalloh reports for Sheffield Live!

As library with longest opening hours in the city is set to close, the Friends of Zest group are holding an open meeting this Saturday, 7 December 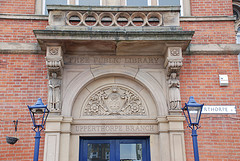 The Friends of Zest Group is holding a public meeting with Cllr Mazher Iqbal on Saturday 7th December at 11am in Upperthorpe Library to make the case for keeping it open.

The Group is campaigning to keep Upperthorpe Library open and for it to be retained as a fully funded Council library.

The library’s weekly opening hours of 86.5 over 7 days of the week are the longest in the city.

Upperthorpe Library is based in the Zest Centre, a community facility which houses a range of health and wellbeing services under one roof.  This co-location makes it very cheap for the City Council to run, according to the Friends of Zest Group, who told Sheffield Live that:

These factors have not been taken into consideration in the Council’s Library Review, according to members of the Friends of Zest Group, who believe that Upperthorpe Library with its co-location in the Zest Centre should be held up by the Council as a model for other community libraries rather than be closed.

Local parent David Smith told Sheffield Live “I bring my children down to swimming lessons every week – whilst one swims, the other sits and reads with me in the library. Having such a well-integrated facility makes it possible to have this great one-to-one time together, rather than sitting around the side of the pool.”

Now that the Council have announced their proposed changes to Sheffield’s Libraries, the Cabinet Member responsible, Councillor Mazher Iqbal, came into Sheffield Live! to the discuss the plans.

In a two-part interview with Sheffield Live’s Laurence Peacock, Councillor Iqbal discussed the the financial background of the proposed changes and the question of sustaining independent libraries.

In part two, we focused on the details of the volunteer groups who have so far come forward to take over some city libraries and the feasibility of their doing so.

You can read the council report here, including all the proposals, and from the same link you can also contribute to the consultation.

The interviews were first broadcast on Communities Live on 2/10/13.

In the interests of full disclosure, we would like to state that Sheffield Live’s volunteer presenter, who conducted the interview (Laurence Peacock) is employed by Sheffield library service.