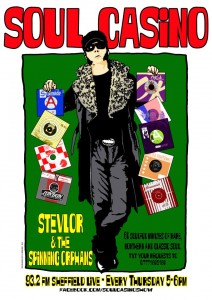 Stevlor with his Spinning Orphans

60 minutes of Rare, Northern and Classic Soul from the late 1950’s up to what we like to call on this show, ‘The Right Side Of Disco’. Expect to hear everything from the record vaults of Motor City to ultra rare tracks and northern gems from the glory days of Wigan Casino, The Golden Torch, Blackpool Mecca, The Twisted wheel and every other venue worth their salt. Not just an hour of the greatest music in the world but an informative trip giving the facts and figures and history of the records and artists played and a reputation for spinning many sounds never heard on any other Soul show on the airwaves.

THE SOUL CASINO RADIO SHOW-THE ONLY NORTHERN SHOW TRANSMITTED LIVE & MADE IN SHEFFIELD!