Sheffield Live! TV is Sheffield’s new local TV channel, launching today (watch news item here). How can you watch it – and what will it cover? Jamie Veitch explains.

It all began when a group of Sharrow community activists made a radio broadcast, from a caravan, of a four-day festival in Sharrow in 2000.

Sharrow Live – as the radio transmission was known – became Sheffield Live! 93.2FM – a community radio station, and secured a full time license to broadcast on FM radio from October 2007.

In the 7 years since Sheffield Live! has built up an eclectic and diverse schedule of radio programming featuring passionate, knowledgeable presenters, and a loyal audience of around 40,000 listeners per week.

The new local TV service is set to broadcast news about Sheffield, alongside programmes covering Sheffield music, sport, culture and much more. 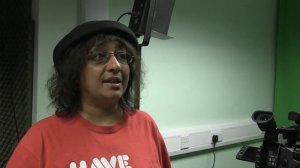 “Our flagship daily news programme, from 6:30pm to 7pm, will give Sheffielders the latest news and key stories from the city – and our news team have already been actively covering key issues. After the news bulletin, discussion show Talking Sheffield will enable Sheffielders to dissect the topics they care most about.”

News and debate – great! What else can you watch?

From 8pm to midnight, the channel will show new, original productions: sport, comedy, music, and more – from independent local producers, as well as video streaming of shows from the existing community radio station. And we will welcome your input, calling on Sheffielders to get involved and to bring your ideas to the station.

What’s local TV all about?

Sheffield’s local TV service comes in the first wave of local stations launching this year across the UK, in cities including Leeds, Manchester, Nottingham, Norwich, Belfast, Bristol and Oxford. All will be available within their local area on Freeview channel 8 and through Virgin cable. Sheffield’s unique geography means the city, and the local channel, have had to wait for Ofcom’s appointed infrastructure provider to build the technology necessary to enable Sheffielders to tune in. But the city was nearly not included in the Government’s first wave of places to get a local TV license. 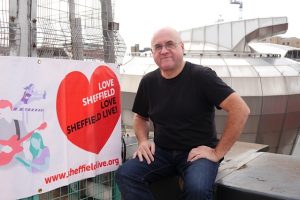 “When Ofcom, the Government’s media regulator, initially advertised the opportunities to bid for local TV licenses in 19 cities in 2012, Sheffield wasn’t even on the list of the first areas. So a number of local social enterprises, businesses, education organisations, and individuals, along with the national Community Media Association, based in Sheffield, and supported by local MPs, lobbied hard for Sheffield to get its own local TV channel in this first wave.

“Once Ofcom accepted that Sheffield should have a local license, three companies bid for the right to operate it. SLTV – a locally owned organisation – secured the license.

“We know that Sheffielders want more local news, and programming about our city’s exciting music scene, local sport, our heritage and events to watch on TV. Sheffield Live TV will deliver this. And uniquely compared with other local TV channels Sheffield Live TV is community owned – it’s part of a society setup for community benefit which earlier this year raised over £165,000 of investment through a community share issue in which ordinary Sheffielders became part owners of their local media.”

So what’s going to be on?

The channel will operate “on a public access model, providing a platform for local talent – Made in Sheffield, Made by you.” The flagship daily news programme will cover Sheffield news in depth. Other programmes will cover Sheffield’s “rich, varied, and diverse” music, events, culture, arts, and sports and include:

and a diverse schedule of further programmes: music, sports (including The Sheffield Sharks basketball) – and more – see www.sheffieldlive.org/shows for more details.

Who can watch and how do you watch?

You can watch SLTV through Freeview Channel 8 if you are tuned to the Crosspool transmitter in Sheffield and through Virgin Cable channel 159 in Sheffield (plans are also underway to add another Freeview transmitter, at Grenoside). About 450,000 people will be able to watch through these routes.

Steve Buckley, chair of SLTV Ltd., adds “Sheffield Live Television will reflect the interests of Sheffield people and communities – and provide a platform for local talent and opportunities for local businesses. It will be an open, diverse and inclusive channel, locally owned and run for community benefit. We look forward to providing Sheffield with the local news and types of programming they’ve asked for from a new local TV channel.”

Sheffield Live! TV is locally owned and run for community benefit. Get involved, send us your photos, news stories or what you want to see on air. Call us on 0114 281 4082 or email info@sheffieldlive.org