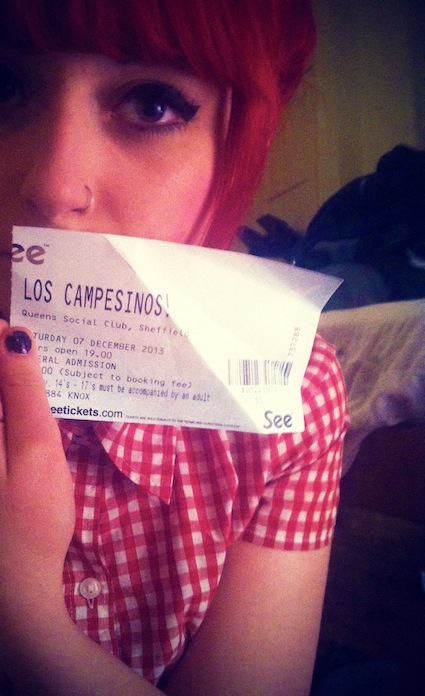 My first shot at reviewing bands for wonderful community station SheffieldLive!  93.2fm; I intend from this point forward to mooch around Sheffield whenever possible attending local gigs and searching for talent, keeping an eye on who’s hot and where they’re playing!

This was my first ever visit to the Queens Social Club in Sheffield despite being born and raised in the city. From the outside my immediate reaction was how similar it was aesthetically to the Brudenell Social Club which I have visited in Leeds.

As a Los Campesinos! fan already, I entered with a strong bias toward the band but as I decided to attend alone I thought this would give me a good means of deciding whether I really was having a good time or not. The venue is relatively small – but crammed with an excited and even adoring gathering of fans!

The best thing about the experience for me was the simple fact that the band looked as if they were having a good time. Rather than appearing as if they had guns to their heads whilst performing, the atmosphere became undoubtedly magical.

I would challenge anybody who were to tell me they left the gig unhappy. Even if the style of music wasn’t your taste, the passion of the people around you and more importantly of the band members themselves made the event a wonderful place to be. There was none of the awful pushing and shoving that seems to become habit of the more moronic gig-goers and everyone had a jolly good jump around whilst being courteous in the process.

But for any band a power cut is something that you could do without – and I wouldn’t have blamed any of them for getting a little narked.  Yet regardless of the power loss that ensued during Romance is Boring (at which point the entire room filled with the voices of dedicated fans) the band stayed cheery. Frontman Gareth cheerily explained the circumstances which, personally, left me rather tickled rather than irked that I would now have to hang around for an unknown amount of time until things got sorted. Gareth’s good humour was evident throughout the gig – especially as he remarked on how he had finally ditched the glockenspiel after years of embarrassment.

If you haven’t already heard Los Campesinos!’ new album ‘No Blues’ it is available to purchase and download from iTunes and also on Spotify.

My next gig review shall be of the wonderful Leeds based band Kamara, who are playing The Old Grindstone in Crookes this Friday! If a Cribs-esque indie vibe is what you’re into a strongly suggest you attend, the best part of course, it’s absolutely free!

About Jade: “I am a tiny, twenty-two year old with a big love for music and radio. Fuelled on caffeine and forever changing the colour of my hair I’m going to be on the hunt for local gigs and talent in and around the steel city!”