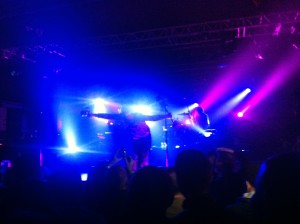 The first band that played were a lovely bunch called Sulk. They had a particularly haunting sound in some of their songs, and I am completely aware of how drawing this comparison is bound to make the blood of adoring fans boil but I couldn’t help feeling a Stone Roses’ vibe when I heard this lot. Certainly a talented set of musicians who I would be more than happy to watch again. My only criticism (stay with me) would be that there could have been a teensy bit more audience engagement, I would happily listen to these in my spare time yet I was given no idea where to find them and so therefore left a little in the dark.

Another band I had not had the joy of listening to previous to the gig but I shall now be hearing on a regular basis as they now grace my Spotify playlist. I enjoyed absolutely everything about this performance, the band had fantastic stage presence and every single person on stage looked as if they were in love with the music that they were playing which as I’ve mentioned before just makes a gig so much more enjoyable for everyone concerned.

I feel as if I could sum up this entire gig with one word – BEZ! What a fantastic man he truly is. What an absolute legend, helmet on, maracas and something which could I can only describe as a MASSIVE staff in his hands, sending the crowd absolutely mental.

Musically the group were outstanding but I couldn’t help feeling slightly let down by the lack of audience interaction from the group, it felt a little disconnected at times, maybe perhaps down to my perception of the group being rowdy and rude – particularly Shaun who I had expected to perhaps say a couple of cheeky things to the audience – but hardly a peep.

I must at this point though, remember that the group, once renowned for being reckless, are not perpetually partying in a universe where time stands still but have of course become older and wiser and less likely to be flailing themselves around a stage, I guess they have truly left those hacienda nights behind.

Still, an exceptional performance which gave me the opportunity to imagine how it would have felt on one of those legendary Madchester nights.