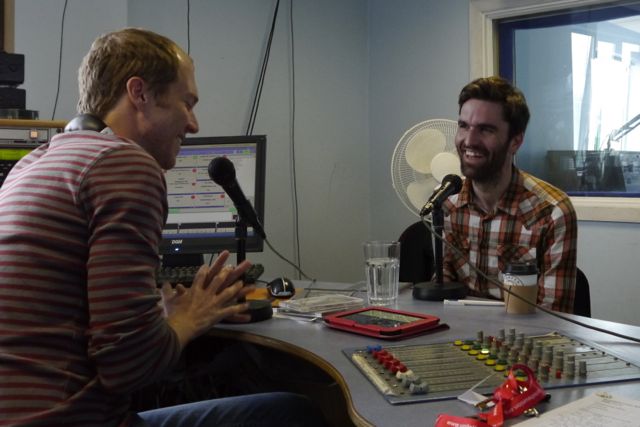 Pete David in the Sheffield Live studio with Max Munday

Max Munday – presenter of Mouthpiece on Sheffield Live each Wednesday from 9am to 11 – welcomed Pete David of acclaimed Sheffield alt-country-folk-rock-Americana band The Payroll Union onto his show today.

The interview marked the start of a new series on Max’s show, Introducing…(covering different musical styles or genres each week).

A must-listen for the growing fan-base of this superb Sheffield group (pick up their compelling album The Mule and The Elephant from The Old Sweet Shop and other good music shops!), the 30-minute interview came at the start of hour-two of today’s Mouthpiece.

If you’ve never heard of Tex-Mex or Desert Noir music, Pete will educate you – as well as tell you about the structure, meaning and message of a good old murder ballad – and much more.

The show also covered the 40th anniversary of Pinochet’s coup in Chile and included an interview with Pedro Fuentes, chair of Sheffield Chilean Community Association who was imprisoned by Pinochet.

What our presenters have been listening to this week