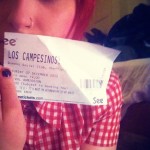 It was an impromptu decision to go and watch my second favourite group from Wakefield (after The Cribs of course) play Sheffield’s wonderful Corporation nightclub, writes music-loving Sheffield Live listener, volunteer and gig correspondent Jade Knox.

The first thing that was in stark contrast to a lot of groups I’ve been watching lately was the showmanship of Dan Feast (lead vocals) who actually jumped off stage to interact directly with his audience and (at the risk of sounding unprofessional) ‘went mental’ dancing and pouring his soul into his performance. When an band or artist truly believes in the sound they are producing it provides a superior experience for everyone involved, just the occasional glance from drummer to bassist and smile from guitarist to singer can make a gig just that little bit more pleasurable to attend.

My one and only grumble about this show was the ever-so-slightly preachy feel that came over me when the lead vocalist gave a small speech on the topic of the music of today, expressing that he felt that none of it was really any good, which is something I completely disagree with.

There are plenty of hardworking non-manufactured DIY bands – not only in Sheffield but all over – that work incredibly hard and sound fantastic, however on the same note I also understand that you do often have to separate the wheat from the chaff.

I did agree with the message that artists and bands should be assessed and judged on a measurement of their talent and sound rather than how they look or decide to dress, but this is a bit of a utopian idea of the music industry – a business where how you look is makes a huge difference.

The band played in Corporation’s smaller room; excellent for a gig like this one which allowed Dan to get right up close and personal. It was an immensely engaging performance and musically the band were above and beyond what I was expecting. The genre they work with is post-hardcore/rock, a genre which I’ve not a lot of experience with, however, it doesn’t take an expert to see just how technically talented this group is.

The set felt a little short and it would have been nice to have heard one or more tracks as after twenty minutes I was quite immersed in the music.