Hundreds attended the Sharrow Festival at the weekend as festival goers celebrated its 21st anniversary. The community event features multiple stages for music and dance, crafts and campaign stalls, and activities including five-a-side football and a graffiti zone. Baillor Jalloh reports for Sheffield Live!

The former Labour Party councillor for Nether Edge and Sharrow, Nasima Akther, who stood down for health reasons, has spoken out in praise of her replacement Jim Steinke. Councillor Akther had had previously been suspended by the Labour Party for not voting along party lines on a motion regarding tree felling. Simon Thake reports for Sheffield Live!

Labour won the Nether Edge and Sharrow by-election by a narrow margin, with Jim Steinke beating Rob Unwin of the Greens by just 132 votes. Steinke told Sheffield Live! that he accepted the tree felling programme had boosted the Green Party vote but he insisted Labour had run a positive campaign and called for a “progressive alliance” within council. Simon Thake reports.

Community sports activities in Sharrow have led to reduced anti-social behaviour according to Wajid Nazir of Sharrow’s One Nation Community Centre. A year ago bonfire night in the Sharrow neighbourhood was marred by violence as local youth hurled fireworks and stones at cars and police but this year’s events went off without incident. Simon Thake reports for Sheffield Live! 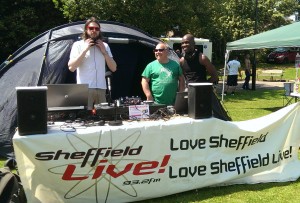 Thousands flocked to Mount Pleasant Park on Saturday to enjoy live music, fun activities, entertainment and visit stalls – including a Sheffield Live! outside broadcast stall – in glorious sunshine for the Sharrow Festival.

The Festival is a flagship event for Sharrow which celebrates the culture and diversity of the area and has been running since 1988. This year’s event attracted over 6000 visitors according to an estimate by Alan Deadman, one of the festival organisers.

Sheffield Live! presenters and team including Lee Price (Vancouver Manoeuvre), Paul Gregory, Kevin Risley (Communities Live!) broadcast live from the festival between 1 and 6pm, with Sangita Basudev in the studio looking after the broadcast of the live feed. 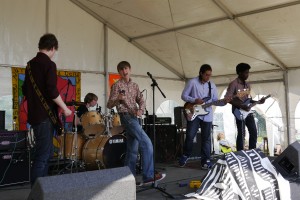 Rust performing on the main stage

Sangita commented “it was fantastic that so many people attended this year’s Sharrow Festival – and to get such a great response from listeners to our live broadcasts. It’s a special event for Sheffield Live – the festival is a wonderful, welcoming, diverse and inclusive event, with music, entertainment and activities for all. And Sheffield Live originally started as a two-day broadcast project from Sharrow Festival, before securing our FM broadcast license nearly 6 years ago. We’re all thrilled that there was a record turnout for the Festival this year.” 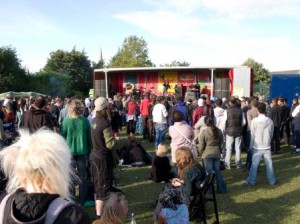 On the 3rd of July, the 13th ‘Sharrow Festival’ was once again held on ‘Mount Pleasant Park’ and continued its reputation as one of Sheffield’s best local festivals with over 7000 people attending to enjoy various music stages and nearly 100 stalls providing a wide selection of foods, crafts and information.

In these two reports produced and presented by Erini Apostolidou for Sheffield Live, we take a closer look at some of the events and people around the festival.

Part 1: Evelyn Joseph presents a local project for sexual health awareness in the BME communities. Ronin Barkshire explains why the extraction of oil from tar sands has to stop and how the struggle to achieve this is connected with saving energy here in the UK. Georgina Valentine gives us an insight on the beneficial effects of meditation. Usua, Maira and their friends tell us about their expectations from the festival and stress the need to bring famous bhangra musicians and performers.

Part 2: A compilation of music performed live at the festival. From rap to gypsy and from a cappella singing to karaoke. Don’t miss young Pallav singing the Jacksons 5 hit “I’ll be there”