The main room at Sheffield’s finest alternative nightclub was filled to the brim for Kids in Glass Houses on the 12th October.  The silence broke and a familiar yet unusual tune began to play. It was “Non, je ne regrette rien” by Edith Piaf – and it halted every conversation in the room. The tension skyrocketed after the classic had come to an end and there was a brief silence before the excited cheers and squeals of fans.

On came Kids in Glass Houses and began one of the most fun gigs I have attended in quite some time. Aled Phillips (lead singer) addressed the audience and kicked things off with Artbreaker I from the 2010 album Dirt. I was surprised and elated at the pure talent he possessed singing live with each track sounding like a recording taken from a studio perfected album.

I was wooed by impressive showmanship, Aled climbed on stage equipment and hung on to metal bars. There was absolutely no barrier between audience and performer as he responded to peoples’ shouts and made jokes with the crowd. When Aled pointed the microphone towards us, the entire room sang back, it was truly delightful. There was a perfect mix of songs from old to new as the group conjured up a near perfect set list containing songs from four studio albums.

Not once did it look as if performing that night looked like a chore and in return the crowd reciprocated the same passion and energy, when the band said bounce, the room moved in unison. It was an extraordinarily exciting gig, upon arrival I wouldn’t have expected myself to have been dancing and shouting lyrics along with everybody else but it was irresistible. It was clear that the band and the audience had the same agenda – to have a great time, and this was exactly what happened.

Towards the middle of the night, the group slowed it down a little for an acoustic song which promoted a sea of waving arms and a couple of cheeky lighters in the air, then things exploded to finish on a wonderfully high note. It is a huge shame that this will be the last time that Kids in Glass Houses will be playing with the announcement of a breakup in February 2014. These guys are not normally my cup of tea musically but if I left every gig I went to with that same level of happiness and excitement the world would be a better place.

Review: Inherit The Stars at The Corporation 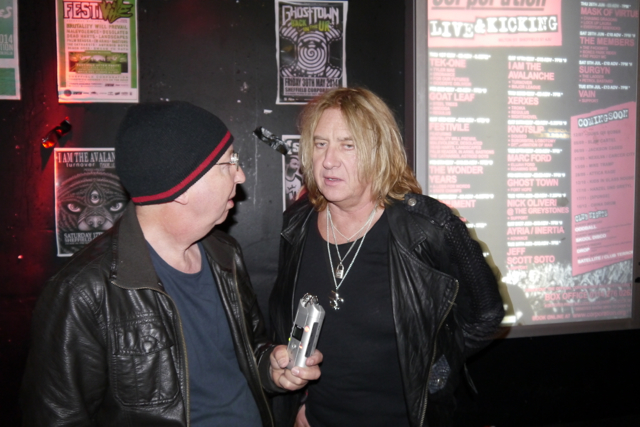