Howard Denby is standing for UKIP in Heeley at the General Election.

Sheffield Fire Fighters joined thousands of others from around England on a march in London.  The demonstration was in protest against the retirement age of Fire Fighters being raised from 55 to 60 years of age and pension rights.

A hundred postcards sent by local children have been sent in to space before being delivered to the recipient in the more traditional way. 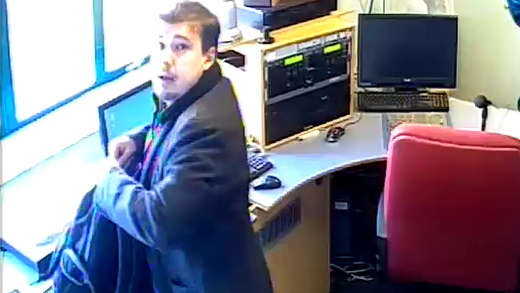 A local film critic has been fined after admitting to theft of cameras from Sheffield’s local TV channel, Sheffield Live.

The two cameras, together worth over £5,000, were taken from Sheffield Live TV during Fekry’s weekly film review radio programme, Slam Dunk Cinema. Sheffield Live recovered one of the cameras from eBay and the other was later found when police raided Fekry’s home.

Fekry has been a regular producer and presenter on Sheffield Live community radio since he launched his Slam Dunk Cinema programme in August 2011. He also writes film reviews, under the name Van Connor, for Exposed Magazine.

Steve Buckley, Chair of Sheffield Live TV, said: “We were shocked to find two of our cameras missing from our broadcast studios just ten weeks after launching Sheffield’s local TV channel and we have been determined to get to the bottom of it. Following a police investigation, we now know that Mr Fekry, who we had known as Van Connor, used his trusted access to our facilities to steal valuable broadcast equipment and to attempt to sell it on eBay. We are very grateful to South Yorkshire Police for their support and assistance.”

Sheffield Live confirmed that it has cancelled the Slam Dunk Cinema radio programme and Fekry is no longer involved with the channel.

A service of commemoration, remembrance and solidarity is to be held on Sunday, 11 January, at 3pm, Barker’s Pool, Sheffield City Centre following the gun attacks on the Charlie Hebdo satirical newspaper and at a Jewish supermarket in Paris. The event is “to reflect on the lives of those killed and injured” and has been organised with the backing of Sheffield City Council.

According to the organisers: “The event will be a time for reflection, expression and prayer; we will be taking the opportunity to talk about the importance of free speech, respect, tolerance and support, and how these precious values hold our society together.”

The Lord Mayor is due to attend together with other speakers from a variety of backgrounds, beliefs and ideals.

Oyster style travel cards, the internet and the scrapping of paper timetables are all possibilities at the Sheffield Interchange in a bid to met the 10% cuts Sheffields’ transport budget.

Sheffield transformed itself in to a winter wonderland with Reindeer, Snowmen and Santas taking over the City Centre before the big Christmas light switch on.

People gathered in The Winter Gardens to make two minutes of noise in remembrance of all those throughout the World who have been killed, tortured and bullied because they are Transgender.

The Blades have just announced that they ”

“retract the opportunity for its former player, Ched Evans, to use the Club’s facilities for training purposes, as was previously intended”
read full statement here

Following the statement dated 11th November and after ongoing and extensive deliberation, Sheffield United Football Club has decided to retract the opportunity for its former player, Ched Evans, to use the Club’s facilities for training purposes, as was previously intended.
Members of the Board have consulted dispassionately with the Club’s supporters, Vice Presidents, Community Foundation members, executives, staff, sponsors and other relevant stakeholders in order to help it reach this decision. Also, the Club has been diligent in communicating with The Football Association, The Football League, The Professional Footballers’ Association (The PFA), The Football Association of Wales and The National Probation Service to take further soundings.
We recognise that a number of our supporters will be disappointed with this decision, but would ask that they remember the responsibilities we have not only to a fine and proud Club, whose history stretches back over 125 years, but also to the communities in which Sheffield United is active and to the City we represent.
The Club initially accepted a request from The PFA for Ched Evans to be able to train. The reaction to this has been at an intensity that could not have been anticipated when first announced.
As noted in previous statements from the Club, the legal system of this country provides for both the punishment and the rehabilitation of every person who has been found guilty of a crime. Sheffield United will not be used to promote the view that professional footballers should be treated differently, as has been the want of certain sections of the media and various commentators. In addition, we remain disappointed at some of the inaccurate reporting, misinformed views and commentary, as well as the actions of a minority of individuals on social media. Professional footballers must be treated as equals before the law.
The Club condemns rape and violence of any kind against women in the strongest possible terms. The Club is aware that Ched Evans is pursuing legal recourse via the Criminal Cases Review Commission in the determination he has to clear his name. We trust that he will be afforded a fair hearing.
During this whole period, we have been served a timely reminder of what we have been throughout our history: Sheffield United is a Family and Community Club that, even in times of adversity, will remain strong and grow from its experiences.
The Club will not be making any further comment on this issue.
Read more at http://www.sufc.co.uk/news/article/sheffield-united-ched-evans-2094632.aspx#8IeRISjwDLkGwiuK.99

Sergio chose exile from Chile in November 1973, a few months after Pinochet overthrew Allende’s government. After a long journey he ended up in Sheffield. This documentary, by film-maker Yiannis Kolozis, tells Sergio’s story of migration and of returning to Chile nearly 40 years on. Sheffield Live! is backing a crowdfunding campaign to complete this full length documentary film. To find out more visit: https://www.indiegogo.com/projects/un-condor-documentary