The week long Nether Edge Festival has launched with an official opening and carnival at St Peter’s Hall Common Ground on Machon Bank Road. The family friendly event features music, concerts, art, literature and sports activities and culminates with the Party in the Park on 24 September. Baillor Jalloh reports for Sheffield Live!

Tree campaigners were out on the streets again today despite a Sheffield Council threat of injunctions to curb the protests. Azz Mohammed reports for Sheffield Live!

The former Labour Party councillor for Nether Edge and Sharrow, Nasima Akther, who stood down for health reasons, has spoken out in praise of her replacement Jim Steinke. Councillor Akther had had previously been suspended by the Labour Party for not voting along party lines on a motion regarding tree felling. Simon Thake reports for Sheffield Live!

Labour won the Nether Edge and Sharrow by-election by a narrow margin, with Jim Steinke beating Rob Unwin of the Greens by just 132 votes. Steinke told Sheffield Live! that he accepted the tree felling programme had boosted the Green Party vote but he insisted Labour had run a positive campaign and called for a “progressive alliance” within council. Simon Thake reports. 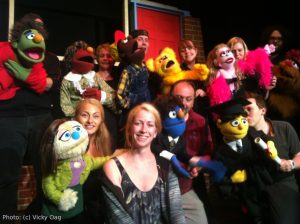 What do you get when you cross a meaning of life story, with sesame street, the muppet show and some distinctly adult humour? No, its not the start of a really bad joke but it does sum up the plot line of musical comedy Avenue Q about to hit the stage of The Lantern Theatre in Sheffield by new amateur theatre company, Cutting Edge.

And Sheffield Live 93.2FM has an interview with the cast – on today’s Communities Live show at noon.

Set on a Avenue Q in New York’s southernmost neighbourhood, the show follows new graduate, Princeton as he works out exactly what is his purpose in life.  Supported by a small cast of humans, monsters and puppets, Princeton and his new neighbours take a comedic journey through “the real issues in modern life – employment, love, politics and exactly why the internet was invented.”

Avenue Q is the first performance project of Sal Foster-Major and Gavin Usher, the people behind Cutting Edge.

Director of the show Sal says: “We set up Cutting Edge to focus on new, innovative and unusual dramatic and musical theatre productions.  Often, amateur musical performers miss out on shows that only require a small cast and we wanted to create somewhere they would give them the opportunity to perform some of the smaller but just as interesting and exciting shows.”

Musical Director Gavin adds: “We wanted to make an impact with our first show so we chose Avenue Q for the visual spectacle of the puppets, the great music and the sheer comedy of the script.  Although it is most definitely aimed at adults, it is a real feel good show with a modern twist.  Whether you love or hate musicals, you cant help but enjoy this show.”

Cast member and puppeteer Chris Hanlon is in charge of one of the colourful cast of puppets that makes this particular show so unique. “There are only 11 of us in the cast and none of us have ever done anything like this before.  Singing, dancing, acting and operating a ‘muppet’ puppet has been quite a challenge but as a cast we have laughed all though the rehearsals, the show is just so funny! We cant wait to get on stage and share it with an audience.”

As well as being the first show produced by the team at Cutting Edge, the small cast also have the kudos of claiming to be the first full scale musical  to be staged at the 84 seater Lantern Theatre.  The 120 year old venue located in Nether Edge has been home to a wide variety of performances including Tony and Olivier award nominated acts but has yet to host anything like this singing and dancing line up of 2 humans, 6 puppets, 2 monsters and 2 very cute but slightly misguided teddy bears.