Eleven-year-old Asher Walton-Mitchell raised over £1,250 in a karate challenge to enable a wheelchair bound neighbour to get a lift installed in his home. Karate enthusiast Asher launched a successful sponsorship appeal to perform 50 katas in an hour to raise funds to support his friend Phil, who has a severe form of multiple sclerosis. 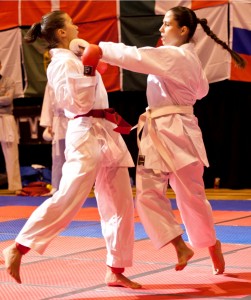 The World Union of Karate-Do Federations (WUKF) has chosen to bring its prestigious European Karate Championships to Sheffield.

The high-profile WUKF event will take place at the English Institute of Sport (EIS Sheffield) from 16-20 October.

More than 1,400 people aged between six and 60 years old will compete in five different categories during the inaugural five-day championships in the sports hall at EIS Sheffield.

Children, cadets, juniors, seniors and veterans from countries including France, Italy and Sweden will take part in an elaborate opening ceremony before bidding to be crowned European champion.

They will be supported by hundreds of coaches, spectators, organisers and volunteers at the Sheffield International Venues (SIV) facility.

As part of the championships, the WUKF will also host a seminar for referees and coaches; and the WUKF presidents meeting. There will also be a technical Kumite seminar delivered by multiple World Champion, Christophe Pinna, at EIS Sheffield. The farewell party will take place at the Holiday Inn Royal Victoria hotel.

Peter Allen, WUKF European President, said: “The event is the first of its kind, combining all the age groups into a European Karate Championships for all ages. Already booked are over 20 countries from Europe.

“Our European Family of Karate Ka will join us in Sheffield which I hope will be the best European Championships to date. I hope competitors, officials and spectators alike, will take back many happy memories of Sheffield and our English culture.

“The opening ceremony is a combination of British music, football memorabilia and world famous Sheffield superstars such as Sheffield’s golden girl Jessica Ennis-Hill. Sheffield is waiting.”

Councillor Isobel Bowler, Sheffield City Council’s Cabinet Member for Culture, Sport and Leisure said: “It is great news to have such a prestigious event come to EIS Sheffield. It sounds incredibly exciting and once again shows what a world class facility we have here in Sheffield to attract such an event as this.

“I wish all the competitors good luck and hope it all goes well.”

Tickets are available online at www.sivtickets.co.uk, through the ticket hotline 0114 223 3777 or in person at the Motorpoint Arena Sheffield, Sheffield City Hall or Sheffield Theatres.