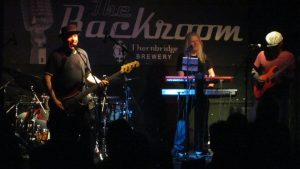 Lifesigns performed at The Greystones on Monday 27th May. Graham Marshall, co-presenter of Sheffield Live!’s Spirit of the Wapentake programme was there – here’s Graham’s review.

Lifesigns released their debut album to great acclaim in January 2013 and have since been No.1 in Amazon classic rock and prog charts in the U.K., U.S.A., Canada, Germany, France, Italy and Japan. Their album sales show little sign of abating and as such the demand for Lifesigns to tour has continued to grow. They were nominated this year by PROG Magazine for their best newcomer award.

Graham and Bona from Spirit of the Wapentake review this relatively new Prog rock band that on paper sound as though they ‘cut the mustard’.. but its what they sound like live that really matters.

Here’s what they thought after the gig: