The national charity, Food Cycle, have launched a new hub in Sharrow at the Cemetery Road Baptist Church with over 100 people attending the launch event. The Food Cycle Hubs, of which this will be the third in Sheffield, aim to reduce social isolation by providing a nutritious meal created from food surplus and prepared by volunteers. Every Wednesday volunteers serve a three course lunch and bring people together from the surrounding community around a freshly-cooked meal. Sheffield Live! reporter Baillor Jalloh spoke to Graham Duncan, organiser of the Food Cycle initiative in Sheffield.

The launch date is set and Sheffield’s famed Niche Nightclub will reopen its doors at a new location on 28 January 2017 after a ten year absence. Tickets for the first night sold out in less than five minutes and there are changes not only to the location but also to the music and age restrictions. Sheffield Live! gained exclusive access to the new site to see the work in progress. Sham Powell reports for Sheffield Live!

Black History Month was launched at SADACCA in Sheffield.  A series of events will take place throughout October to celebrate and reflect on a history that is not often told. 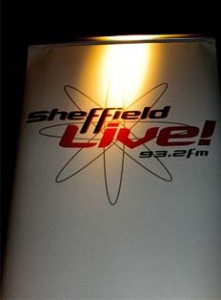 Sheffield Lord Mayor Arthur Dunworth was joined by scores of musicians, DJs, community heads and other VIPs to celebrate the launch of Sheffield Live! 93.2FM: the city’s first new FM local radio station since the 1970s.

Around 200 people attended the launch event on Monday 29th October to raise a glass to Sangita Basudev, Chief Executive, and the Sheffield Live! team, who have campaigned for years for a full time FM community radio licence for the city. Sangita said: “There has been hundreds of people involved in the push for a full time licence over the years and we’ve been receiving messages of good will from all over the world.

“It was fantastic that so many people were able to join us for our launch and I’m looking forward to as many people as possible being involved with the station in the months and years to come.”

The launch of Sheffield Live! was also welcomed in the House of Commons. Ian Lucas MP for Wrexham and a Parliamentary Private Secretary in the Home Office, speaking at a House of Commons adjournment debate on community radio, said: “Sheffield Live, is beginning to broadcast today. I wish it all the best; I am sure it will contribute hugely to its community.”

“Community radio is one of the Government’s great success stories. It was introduced by the Communications Act 2003 and is now governed by the Community Radio Order 2004. Some 148 licences have been awarded under the community radio legislation and at present 85 new stations are broadcasting to provide services to their local communities.”

Sheffield Live! hit the airwaves at 7am on Monday 29 October, broadcasting live for an initial 18 hours a day to a potential audience of more than 350,000 people in Sheffield and Rotherham, on 93.2FM. “The response we’ve had since we first heard we’d been granted the FM licence has been phenomenal,” said Sangita. “It was an incredible moment when we ‘flicked the switch’ and went live across South Yorkshire to over 350,000 people.”

Sheffield Live! 93.2FM is offering a true alternative to existing local FM stations, providing a platform for local artists and offering a voice for all communities in the city and surrounding region.