Local teacher and Magistrate Iffat Hameed has been awarded an MBE, in Queen’s Birthday Honours List. She has been honoured for her work in education within the city.

Hallam University Paramedic students have developed training to attract more people from Black and Minority Ethnic backgrounds into the profession. Research shows that only 7 percent of the service are from Minority communities.

People who live in Flats are being urged by South Yorkshire Fire and Rescue to ask their Landlords for clear escape routes in case of fire.

Green Top Circus was set up nearly 20 years ago and since then has been holding workshops for local people to learn how to do everything from juggling to aerial acrobatics.

The GMB has voted to go on strike for better working conditions here in the City.  Peter Davies, Organiser for the Sheffield City Council branch of the GMB said they want better welfare conditions for the workers.

Sheffield Live! also approached Sheffield City Council and the Green Company but no one was available for an interview. However, they sent us a written statement which said  “We are aware that GMB members have decided to take industrial action at The Green Company. Discussions are continuing with the union and its representatives about any concerns expressed by staff working for The Green Company.

The Green Company and GMB representatives will work together to resolve any issues that need addressing. We want to sort any issues out speedily. If strike action does occur we will do everything we can to minimise disruption and keep as many sites open as possible.”

We spoke to Peter Davis who explained why they have decided to take strike action.

Television programmes in production for Sheffield Live! TV were enthusiastically applauded by a public audience including shareholders and supporters at a Showroom Cinema screening last week.

The first Sheffield Live! TV showreel has now been published online to view and comment. Sheffield Live! TV, the digital local TV channel for Sheffield, will launch in autumn on Freeview, Virgin cable and the internet. The showreel provides a taster of the range of content planned for the new channel including music, film, outdoors, sport, comedy and experimental work.

Sheffield Live! TV is locally owned and run for community benefit. Sheffielders have been invited to invest in the project to help get it off to a flying start and to join a growing band of community shareholders. The Sheffield Community Media Ltd Pioneer and Community Share Offer is open until 14 August, with full details available online at: www.sheffieldlive.org/shares

“Gorillas is a lovely, lively night for all poets, new and veteran, shy and brazen, to come and meet other writers and speakers in a welcoming Sheffield pub (the Bell Jar on London Road). Our Monday night sessions alternate between slams (competition with friendly, supportive judging and lots of applause!) and open mics, which are a good place to try out new stuff.

“As a fairly new poet, for me Gorillas is fun, exciting, creative and above all inclusive. Nobody feels like they can’t have a go, and everybody feels happy (except when there is a sad poem of course). Every session has a different vibe according to the people who come along, and I always leave feeling inspired and tickled by words.”

Join the Sheffield Live! team and some of Sheffield’s best musical talent for an end of year blowout at the Harley.

This is our time to bring on the festive spirit and celebrate another fab year! The gig is also the start of a great new relationship with the good folks at Sheffield’s premier live music venue. Get out your diaries
for a monthly Sheffield Live! night at the Harley in 2010. Don’t miss our showcase of Sheffield’s musical talent every second Monday of the month.

December’s gig has an eclectic line-up as you would expect:

La Folie
Let La Folie be your Alka Seltza. It might taste a little funny at first but you’ll feel better for it later.
http://www.myspace.com/lafolieband

The Deutschmarks
Deutschmarks (f.k.a. Neon Claws) are a musical group, who play classic pop songs with lyrics that are suggestive and names that harbour their love of terrible puns.
http://www.myspace.com/deutschmarkssss

Taylor & Cohen
Jazz Funk and a bit of soul for the new decade.
http://www.myspace.com/ry2kmusic

The night will close with Sheffield Live! DJ sets from Joel and Owen from ‘The Breakdown.’

Tune in to Sheffield Live! to hear tracks from all the bands and interviews with the music makers!

If you’re reading this, then you’ve probably already noticed that we’ve got a brand new website, one which will hopefully allow us to deliver the best online content straight to your browser. 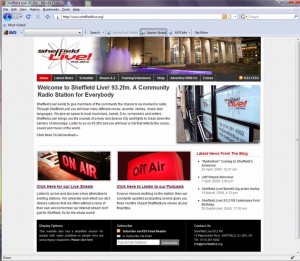 For those of you familiar with the old site, don’t worry. Here on the new look Sheffieldlive.org you’ll still be able listen to our ‘live stream’ and all of our ‘archived podcasts’. But as well as those old familiar services, you’ll now be able to read our regular blog, get involved with our training program, download extra goodies, visit our online shop, listen to our interview archive and find out even more about your favourites shows.

Also while we’ve got your attention, don’t forget to check out our new pages on, Myspace, Facebook and Twitter for the complete online Sheffield Live! experience.

We’ll be adding even more content over the next few months and also explaining how you can get involved with creating items the website yourself. So in the meantime, keep it locked on Sheffieldlive.org and remember, “Love Sheffield, Love Sheffield Live!”