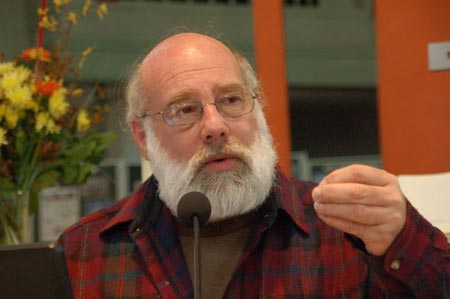 On the fourth of September Jeff Halper visited Sheffield to participate at a public meeting organized by the Palestine Solidarity Campaign. Jeff is the director of the Israeli Committee against House Demolition (ICAHD). In his speech he gave an account of the territorial expansion of the Israeli control and the tools used for this purpose: the construction of new settlements and the demolition of Palestinian homes. He explained that this is no side aspect of the conflict, but a central one, namely the one which most than anything undermines the viability of a future Palestinian state. Jeff also introduced the audience to ICAHD’s work. Musheir El Farra, chair of the Sheffield PSC, opened the meeting.

The team from Communities Live (broadcast every weekday from 12 till 1pm) was at the meeting, and presented the highlights a few days later: