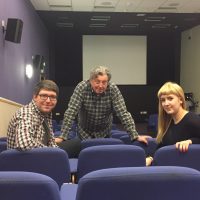 The Film Show, presented by Martin Carter and Shelley O’ Brien is a weekly news and reviews show devoted to cinema in and around Sheffield. Special screenings, festivals and new releases are covered each week along with features on community cinema, film societies and films being shot in the city. If you are interested in…

There is not another programme for this show scheduled at present.

Show pages »
© 2022 Sheffield Live! Made in Sheffield. Made by You. Problems with the website? Let us know! Powered by